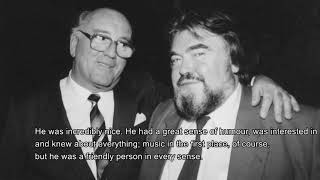 The portrait of composer Frigyer Hidas

Frigyes Hidas (25 May 1928, Budapest – 7 March 2007, Budapest) was a Hungarian composer. Hidas studied composition at the Franz Liszt Academy of Music in Budapest with János Visky. After his studies, he was the musical director of the National Theater in Budapest from 1951 to 1966 and also held the same role at the city's Operetta Theater from 1974 to 1979. Following this, Hidas was a freelance composer. His oeuvre covered almost every genre, including operas, ballets, concer

Concert Review: Alterity at The Abbey Alterity Chamber Orchestra directed by Laszlo Marosi Thursday, February 28 th at The Abbey event lounge in Orlando In February 2018 the New York Times reviewed the Timucua Ars Foundation’s chamber orchestra, Alterity, commending its “passion without formality” in presenting contemporary classical music. One year on, in an event lounge bursting at the seams, an enthusiastic audience could attest to the validity of this observation. Ca